-Mr. Ruffles announcing what he will do to Cousin Lenny right before Lenny's murder.

Mr. "Mr" Ruffles is the democratically elected president of Ruffleton, the Ruffles' region of Chiptopia, and by extension the Ruffle Corp. He sees himself as the true ruler of Chiptopia, although the archipelago doesn't have a single ruler. He is considered Mr. Dorito's and Dadrito's arch enemy.

Mr. Ruffle completed a cursory education, graduating from Chip High and receiving a major in Chip History. After his graduation, he spent much of his time going to raves and watching Japanese animation (anime), specifically "anime cat girls", as detailed on his dating profile.

During his life as a young adult, Mr. Ruffles lived through a dark period he calls "The Dark Days". Not many details are available of his specific actions, besides the fact that these actions were "bad" and "unforgettable". However, it is known that he was at one point a drug dealer (dealing in gourmet Dorito dust.) 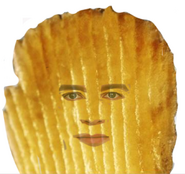 A hyperrealistic portrait of Mr. Ruffles. 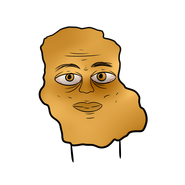 A realistic portrait of Mr. Ruffles. 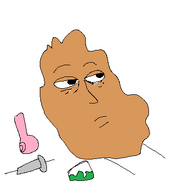 A rendering of Mr. Ruffles during his "Dark Days"

Mr. Ruffles seen during a rave. 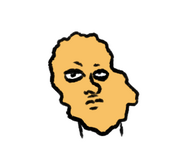 Mr. Ruffles.
Add a photo to this gallery
Retrieved from "https://chiptopia.fandom.com/wiki/Mr._Ruffles?oldid=536"
Community content is available under CC-BY-SA unless otherwise noted.