Born early with only a 20% survival rate to Memaw and Granddad Dorito, Dadrito had always faced life with great hardships. However, through these hardships, he claims they had "helped him grow into the hypebeast he was born to be". In his school years, Dadrito was often sent to the Chip Principal for beating other chiplings up and was expelled around four times. When he was told that he would not be able to graduate if he'd get expelled once more, he decided to clean up his act. In his senior year of Chip School, he met the young Momrito and the two decided to start dating. Dadrito graduated with an excellent CPA (Chip Point Average) and all was well, or so he thought.

Life was going good for Dadrito- he had a stable job out of Chip School and a good woman beside him. However, one day things turned for the worst. Dadrito had returned home from a hard day of work to see Momrito in bed with another man, a ruffle, to be exact. This event ended their relationship promptly and Dadrito told himself that he would never love again. He moved out of Chipvada and to Chiptopia, where he found work and joined the CIA (Chip Intelligence Agency).

Dadrito excelled in his CIA career; carrying out several secret missions and becoming close with many high figures, including the President of Chiptopia himself. Though he prefers not to talk about a great many number of his past missions, he still looks upon those days fondly- maybe, even, the best of his life. Especially when he met the love of his life, Uma Thurman, at a bar in the Capital. The two started as acquaintances, then friends, and soon to be lovers. They hit it off immediately and grew to be inseparable, with Dadrito even proposing to Uma. However, with the CIA job and Uma's acting career, they decided to wait on marriage and stayed lovers instead. Many years into their relationship and finally, they decided to tie the knot. Although they were of two different substances and could not start a family together, their love remained the same.

Three years after their wedding, Dadrito noticed that he was being hunted by a man, rather creature, that he had dealt with in the CIA. It was none other than The Grim Chipper himself, he who has escaped incarnation done by an early-agent Dadrito for unspeakable murder charges. Dadrito did his best to hide his and Uma's identity, but it was to no avail. The Grim Chipper had found Uma and murdered her- sending her soul into The Grim Chipper's vortex. Dadrito was never the same after her death and lost his job with the CIA, turning to drugs and alcohol for comfort. Eventually he used his skills in profiling and joined a Dorito street gang known as the "Cheezies". There, he committed several crimes such as drug dealing, arson, and even some as dark as murder. When the Cheezie gang was eventually apprehended, Dadrito and several other members were put into prison for their crimes.

While in prison, Dadrito picked up a rapping career and released numerous albums about his misfortune. One album, "Uma And Me" reached #1 on the Billboard Hot 100 Chart making Dadrito the first Nacho Cheese Dorito to have an album released and be a hit while in prison.

Dadrito had realized his faults, and decided to sober and clean his act up upon his release. When the day had come, Dadrito reunited with Momrito and the two married- having their son, Mr. Dorito together. 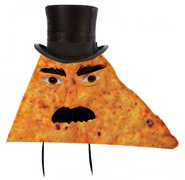 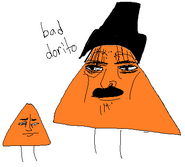 Dadrito getting ready for Uma. 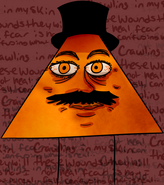 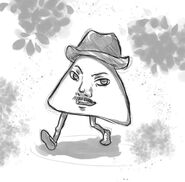 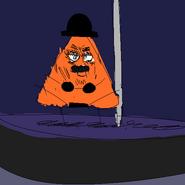 Dadrito caught having to strip for money.

The Dadrito level chart.
Add a photo to this gallery
Retrieved from "https://chiptopia.fandom.com/wiki/Dadrito?oldid=572"
Community content is available under CC-BY-SA unless otherwise noted.