Loves his mom very much

-Michael directing his creation, Cousin Larry 2.0, to destroy Lenny once and for all.

Michael had always been in the shadow of his arch nemesis, Cousin Lenny. Lenny had always been the better gamer, had the better loot, had the best advantages, and Michael did not. Michael was always trying to one-up Lenny, but to no avail. Lenny always remained on top, with Michael always being a close second. After Lenny had been murdered by Mr. Ruffles and reborn into a demigod, Michael's rage grew even stronger and made his life goal to completely get rid of Cousin Lenny, forever.

-The members of the Dorito SWAT team after finding out there was no bomb in Cousin Lenny's house.

Cousin Lenny was streaming some World of Cheesecraft when suddenly the Dorito SWAT team had broken into his house. They put Lenny at gunpoint and asked him where the bomb was, but in reality there had been no bomb. Cousin Michael had called the police and ordered them to go to Lenny's house saying that he had a bomb, and in turn Lenny got stuck in a sticky situation. Lenny got off without any charges, but Michael was caught being the source of the call and was sentenced to 10 years in prison. There, he had met people like Dadrito and Mr. Ruffles, Lenny's previous killer.

The Creation of Cousin Larry 2.0

Cousin Michael was at his wits end after creating countless robots in his mother's basement in a feat to destroy Cousin Lenny. He was trying to build a cyborg with extreme strength and speed that would only surpass Lenny, so the robot could track down and murder Lenny and never let him come back.

After the attempts, he had decided to cut a bargain with Zvjezdorito, who also hated Lenny very much. They worked together and created Cousin Larry 2.0, a more stable and stronger version of the previous robots. He was ready to exterminate Lenny.

Michael sent him off to destroy, and after tons of encounters between the two, Cousin Larry 2.0 was defeated at Blizzcon 2018 during an extreme battle between Lenny and the robot. Cousin Michael watched in horror as his precious creation was squished to metal bits, and he had also thought about him losing his contact with Zvjezdorito. He spent the next few weeks crying himself to sleep every night, and only video games satisfied his depression. 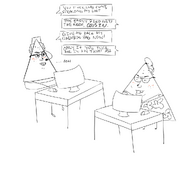 Cousin Michael bickering with Cousin Lenny.
Add a photo to this gallery
Retrieved from "https://chiptopia.fandom.com/wiki/Cousin_Michael?oldid=514"
Community content is available under CC-BY-SA unless otherwise noted.