Deceased, killed by Cousin Lenny in an Overwatch Death Match (BlizzCon circa 2018)

Cousin Michael (Creator), Zvjezdorito (Father-figure, as Michael had summoned Zvjezdorito to help create him and Larry refers to the anti-god as his dad.)

-Larry reminding himself of his purpose.

Cousin Larry 2.0 (formerly versions 1.0,1.5 but they were unsuccessful) was created in Cousin Michael's basement to rival Cousin Lenny.

Angered by the fact that his rival, Cousin Lenny, excelled at video games and got the best loot, Michael schemed to create a being "more powerful than Sargeras himself" to stop Lenny and potentially kill him. He had created Beta versions (1.0, 1.5) but all seemed to either stay unbooted, would ignore command, or even combust into flames- burning his mother's treasured possessions in the process. In a desperate attempt, Cousin Michael summoned the God of Chaos, Zvjezdorito, and begged for his help. Intrigued by his idea (as well as a similar hatred for Lenny) Zvjezdorito agreed and thus, Cousin Larry 2.0 was born.

Searching far and wide for the completely unsuspecting Lenny, he was finally found on the city streets of Chiptopia outside of the local game shop. Immediately, Cousin Lenny knew this was a threat sent by Michael and ran off, losing Larry in the crowd. 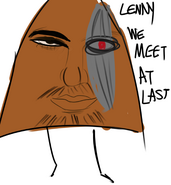 Larry when he finally found Cousin Lenny at BlizzCon 2018. 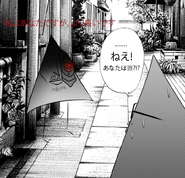 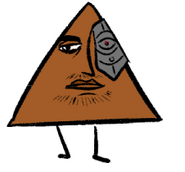 Larry, glancing around
Add a photo to this gallery
Retrieved from "https://chiptopia.fandom.com/wiki/Cousin_Larry_2.0?oldid=559"
Community content is available under CC-BY-SA unless otherwise noted.